Thank you for the praise Health Minister Burnham

To: Mr Andy Burnham
Minister of State, Department of Health
The House of Commons 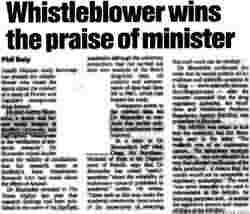 I don't really need praise Health Minister Burnham. I would however be appreciative if you could reassure me you are doing all you can to ensure that the system designed to ensure integrity in medicine is operating as doctors and patients would imagine it should: - honestly, without intimidation and in a transparent manner. You will be aware of serious concerns that have been raised by others about the Medicine and Healthcare Products Regulatory agency - MHRA (1, 2, 3, 4) the General Medical Council, and the influence of the pharmaceutical industry on scientific debate (3, 5).


For your information I reproduce a paragraph of text from a forthcoming Journal article (6) about the functioning of the MHRA in the Sheffield case. It has also appeared in abbreviated form in Healthwatch (7) this week. I will be writing to you about this with further details shortly.

"The Sheffield dispute was discussed in the UK parliament in December 2005 and was transmitted by the Health Minister to the UK drugs regulator (the Medicine and Healthcare Products Regulatory Agency, MHRA) for "investigation". The MHRA is itself accused of failing to examine or to secure raw data in drug licensing applications, simply accepting the word of industry with blind faith (8,3). Since this was precisely the problem in Sheffield, its disinclination to investigate was hardly surprising.

No investigation (or at least anything fitting that definition) took place. The MHRA failed to produce any report, declined to accept any documentary evidence (9, MHRA response to FOI request #06/115), stated that the matter was of "low priority" (9), and that the agency does not have any procedure for investigating research misconduct (MHRA response to FOI #06/188). Further, it claimed that the drug regulator has no remit, nor any necessary obligation to be interested in the integrity of the scientific literature about drugs (9, MHRA FOI #06/188) unless related to licensing (and collected using documentation appropriate for licensing). It even argued that it is "illegal" for a scientist to have data pertaining to information written in his name without the consent of the company "owning" that data (9,MHRA FOI #06/115). It refused to compare data it was sent from Sheffield with the original data it should have received and examined as part of the licensing process for Actonel. Initially, this refusal was on the basis that it would be "too much work" (MHRA FOI #06/059). Later, it admitted that that it had not in fact seen or retained raw data prior to approving the drug (MHRA FOI #05/404). With governments setting the standard for scientific conduct, it is hardly surprising that independent science has encountered such difficulties. "

I find your blog hysterically funny. I know this is serious stuff, but you have retained a sense of humor through this all.