Am I Normal? More on the case of Lisa Blakemore Brown 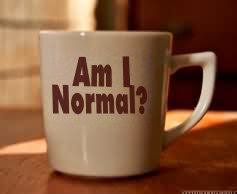 The psychiatric transcript of LBB's "trial" has now appeared online here. I will be analyzing this part of her "trial" in detail over the next few days. What happened to Blakemore Brown must never happen to any other commentator on science. The BPS approach to debate is absolutely wrong and against the public interest.

Worse still, the BPS have shrouded the issue in secrecy [Link]. They have allowed the nature of the "charges" to be misrepresented in public while refusing to allow Blakemore Brown to i) discuss her own case, ii) present her case at an international meeting, or iii) publish the transcripts of her trial. The BPS have threatened legal proceedings if Blakemore Brown breaks their "copyright" on what they have done to her.

If Blakemore-Brown did do anything seriously wrong in terms of patient care, then charges should be examined in detail, and criticism should be transparent - but we have seen no evidence of this in her "trial". These procedures have been likened to a Salem Witch Trial and threaten to shut down all debate. I don't have to agree with her in order to be repelled by what is happening. This is not how debates about policy or science should work.

Blakemore Brown appears as sane as the next person working in this controversial area. Having spoken extensively with her, her colleagues and some of her patients, it would be hard to describe her as having a paranoid illness. Even harder since those of us who have investigated the facts of her case know that all of her so called "paranoid delusions" appear to have a solid foundation in fact. The British Psychological Society don't appear to be too concerned about facts. Blakemore Brown claimed that:

Unfortunately for Blakemore Brown, she also claimed (amongst many other excellent writings) that thimerosal in vaccines might not be such a great idea. Furthermore she claimed that some prominent paediatricians might have misled the scientific community in terms of the strength of science relating to the diagnosis of Münchhausen's Syndrome by Proxy (MSbP) and supposed murders and injury of children by their mothers. I have no idea at all about this aspect of science. I have no idea whether there is any credible scientific evidence to indicate the specificity and sensitivity of indices for diagnosis of MSbP. I have no idea whether vaccines are always helpful. Lisa Blakemore Brown may well be wrong - but I am starting to wonder why those in power feel the need to stifle debate in this most controversial and scientifically blurry area of medicine.

There are of course never conspiracies to discredit those who forward unpopular, embarrassing or potentially costly scientific viewpoints. Those who believe in conspiracies must be mentally ill. See the next posting on querulous paranoia, and more about the Mental Health Research Network.

You should read about the case of the BPS and the mysterious tea-drinking episode.

The BPS is a pathetic but also corrupt narrow minded organisation. As you suggest they have not made any statement about real intergrity concerns. Surprising as psychologists are (or used to be) an enlightened group.

I am Lisa Blakemore-Brown's brother.

I have stood by her and tried to help - futilely up to now - whilst all this utter nonense has been perpetrated upon her.
The wind however is shifting...

I can tell you that I believe my sister to be opinionated and sometimes un-subtle in her approach, she also somethimes loses her patience - normally only with idiots though - those are the "bad bits" as it were.

I also know her to be thorough, knowledgeable, informed, intuitive, passionate - to throw in just a few superlatives; and anyone who knows her, knows that in relation to her work her dedication and instincts are second to none.
She detests bullying amd has shown extreme courage in the face of this utter nonsense perpetrated by the BPS and others.

I have to note that I have experienced just such corporate bullying and harassment in my own life.
If you stand up to the corporate bullies, or dare to have an opinion, or even worse disagree with them and have the temerity to be right, due to the fact you actually did the work to ensure that you were - then may your god help you.
The personal cost can be apalling.

As it has been for Lisa, who whilst she has been dealing with this has also dealt with cancer, severe injury to her daughter, dissolution of her marriage, loss of her house - the list goes on.

Can I honestly stand here and state that all these things were directly related? Well that is possibly not provable, who can say?

If the question is "Were the outcomes of the Munchausen's and Thimerosol situations, and the BPS construct causal to her problems"; then without doubt the answer is yes.
Profoundly so.

What else can I tell you, my sister and I have had some of the most wonderful fights and arguments in the world, but she stood my corner when needed, she watched my back - she is loyal and honourable.

She has passionately supported (a lot of) normal people she considered to have been unfairly treated or downtrodden or ill-judged; and on their behalf, she has continually annoyed authority by winning cases she maybe shouldn't have!

Is she perfect - 'fraid not, just like the rest of us she is far from it!
BUT
Is she mad and paranoid - well provably absolutely not - because THEY REALLY ARE OUT TO GET HER!!!!

So where are we now?

Well we have a lot of hard documentary evidence and I am trying to persuade my sister to move this out of the utterly farcical BPS kangaroo court and into a formal legal environment - the level playing field we need.
I think that in a proper court of law the BPS will be found to have a lot to answer for - and they will not be able to hide behind the shifting sands of their own constructs and "process".
Process?!

As I understand it the BPS is not a government appointed body, neither is it regulated, and I do not believe that my sister was even a member when this nonsense started. Consequently, I do not believe that she was constrained or governed by any contract that directly existed between her and the BPS, at any of the petinent times of events, during the life of this travesty of justice. It's all very highly dubious.

In my view the truth is the BPS can continue to defame and harass her, but I do not believe (under advisement)they can stop her from practising her trade.
Which is very good news, because she really is very good at it.
If they were allowed to do this it would be a crime against the people that she can help.

I believe that she MUST fight on, the logic of the BPS "case" is simply not credible and must be tested in court.

I probably shouldn't say this but I am upset and very angry - so here goes - we're coming after you BPS - we are no longer scared and it's payback time.