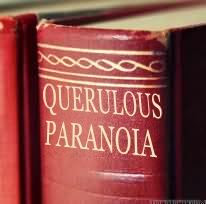 King's College London claim to know whether individuals are mentally "normal". See this fascinating study - Am I normal? - from King's College. Norms were reported for the 21-item PDI psychometric test for delusional ideation. Although the deluded sample of schizotypal inpatients scored significantly higher than "normal" individuals, the range of scores overlapped considerably, with 11 percent of healthy adults scoring higher than the mean of the deluded group.

Other silly research reported from King's College London suggests that "one in three people in the UK regularly suffers paranoid or suspicious fears" based on the King's College definition of paranoia that runs along the lines of "Paranoid thinking is the suspicion that other people intend to do us harm." According to this wonderful research (and the accompanying book "Overcoming Paranoid and Suspicious Thoughts"):Watch for the promotion of drug therapy any time soon (perhaps by the Mental Health Research Network - see last post - also coordinated by King's College London).

But what if people really do "intend to do us (or society) harm"? Paranoia (as incorrectly defined above) is a normal human defense mechanism designed to protect us against harm. So is fear. Protective mechanisms can be influenced by disease. But it is necessary to know the normal range of human response to bullying, and to confirm that paranoid "delusions" are in fact false before diagnosing mental illness. Sadly the British Psychological Society appear unconcerned about reality in their assertions of paranoia (read). Psychiatric labelling (such as querulous paranoia) can be a potent form of abuse. Querulous paranoia is the disease of asking too many difficult questions.

The British Psychological Society appear to endorse tests for paranoia along the lines of those discussed by Dr Rita Pal when she faced accusations of mental illness after pointing to deaths on a geriatric ward and the subsequent cover-up. After causing the target some considerable stress by obfuscating and ignoring concerns, a test along the lines of the one below can sometimes prove diagnostically helpful. 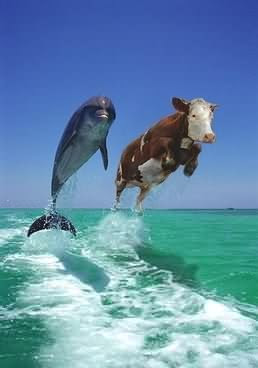 Look at the picture of two dolphins jumping out of the water in tandem. Research has shown that the more differences you notice between the two dolphins, the more paranoid you are. This is attributed to the concentration on minute details, distress and preoccupation induced by those in power pretending not to hear what you are saying. It also serves as an excellent test to divert attention from fiddled research involving drugs.

Such highly useful tests to detect, treat and remove the "mentally ill" from the population derives from the same highly developed system of scientific psychology and psychiatry that gave us Teenscreen (imposed screening tests in the USA to detect, drug and sometimes kill normal children - Link), hidden information about the antipsychotic drug Zyprexa, and the despicable attempts to hide away information about suicide in antidepressant drug trials [Link] [Link].

It is both notable and shameful that the neither the General Medical Council nor the British Psychological Society have uttered a peep about these scandals. They have instead colluded to hide away concerns about the science upon which we as doctors rely [Link] [Link]. The UK drugs regulator, the MHRA has colluded with industry attempts to pervert science, and has failed to address many important matters brought to their attention [Link] [Link] [Link]. Instead they bully and abuse those who raise concerns, while never dealing plausibly with the concerns raised. Our patients and the public suffer in the process - but these professional bodies have little interest in honest science, honest debate or the welfare of patients.

The British Psychological Society need to do some serious explaining.

For some good essays on brilliance and madness see The Icarus Project.

The Institute of Psychiatry tends and Kings College London tends to spend too much time in their stuffy old books and not enough time getting out more.

The public's definition of " paranoia" is not the same as the psychiatric definition. For instance, subjective perception of paranoia without an objective measurement ( as Kings College have done)renders its study completely flawed :). Someone ought to have thought about the methodology before sprouting this rubbish.

I note that Dr Gaius Davies is linked to Kings College London. I though believe that a number of psychiatrists are out of touch with the modern world.

It is obvious to any cow or dolphin that the Lisa Blakemore Brown issue arose due to a internet flame war. The BPS would have been wise to drop the entire complaint. Should this be challenged in court by the Blakemore camp - the BPS would be in a extremely fragile state - with their position in tatters having to justify why they are attempting to suppress the said views of Lisa Blakemore Brown. This is in effect a breach of Article 10 of the Human Rights Act 1998. If the BPS are found guilty of this issue then we raise the question of its own fitness to practise in a modern world. In effect, a finding of this sort would place them in the groups who abuse psychology and psychiatry.

There's a name for animals who don't experience fear: Food.

Fear keeps us from being victimized.

There's a name for animals who don't experience fear: Food.

Fear keeps us from being victimized.

paranoia is a survival instinct yet some take it to extreems either genetic or from bad parenting i suffered extreem dilusions from cocaine speed acid & bad cuts drug dealers put into there drugs. I now in my mid 40's suffer from past drug abuse and take prescribed drugs to help me feel in a state of well being i used to pick up daily so i wouldnt abuse now i get weekly scripts and do not want to abuse drugs yet still feel i would become suicidal without my prescriptions. I have had doctors leave me in suicidal states of being thinking cleaning me up was the answere, I still get bouts of paranoia and depression but i am able to get through as they would be much worse without my doctors care!I am crime free and attend church and am able to work so what i am getting to is some doctors hard line approach to not prescribe benzos and drugs for antidepression also subutext our out of touch with the realities of drug abuse and just read the mims but do not have a clue what its like to suffere with drug abuse past or present.I may be on these drugs presribed for the rest of my life or maybe not, but which is worse me being addicted to prescribed drugs or illegal drugs?