The mission of a University: Burger Flipping, Tenure, Berkeley and British Petroleum 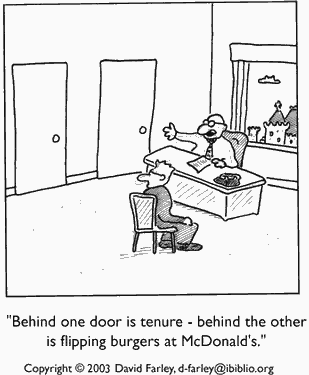 "Behind one of these two doors is tenure - Behind the other is flipping burgers". Which do you pick? (Hat tip Omni Brain for cartoon).

Farley appears to have missed the boat in this instance. The door leading to tenure is the same door that leads to McDonald’s, Procter and Gamble or British Petroleum.

Recent events at the University of California at Berkeley underlie the anxieties we should be feeling about the cataclysms occurring at academic-industrial interface. On the 1st of February the oil giant BP announced that it had chosen UC Berkeley to lead the largest academic-industrial research alliance in history ($500 million over 10 years).

LA journalist Jennifer Washburn writes well about the undoing of Universities as part of such deals. "Would the institutionalization of BP at Berkeley call into question the essential objectivity of the research generated by the collaboration?" Her full news report in the LA times is here, extracts are below. It is also worth reading the speech by Professor Ignacio Chapela to the Berkeley senate on 8 March 2007 (full text here, webcast here).

For anyone wondering what these sorts of partnerships mean for a university without an academic compass it is worth reading what happened to Professor Tyrone Hayes at UC Berkeley in 2003 when he tried to publish scientific findings about the pesticide atrazine -- based on collaboration with the company Syngenta (see also excellent article in the Ecologist about this incident). It is worth remembering what happened to Professor Ignacio Chapela at Berkeley in 2004 when he tried to pubish a Nature article showing that genetically modified corn had contaminated native maize in Mexico - stepping on the toes of a Berkeley-Novartis agreement.

In the absence of a compass, such partnerships have little to do with scholarship and are at odds with the fundamental mission of a University. In the worst cases, such partnerships may smooth the path to corporate research misconduct. Academics might be used to give flawed, secret or selectively reported research a veneer of university respectability, while the deal undermines the very basis of that respectability.

I have nothing against big industry or big pharmaceutical companies. However their raison d'être is to make money. If industry gets involved in science, it has to balance genuine hypothesis testing and transparency against commercial interests and the financial consequences of dishonesty. This is not in itself a criticism - it is a simple fact. Universities exist for a different reason:- to add to human knowledge and to disseminate that knowledge through publication and teaching.

I might be inclined to choose the burger flipping.

ON FEB.1, the oil giant BP announced that it had chosen UC Berkeley, in partnership with the Lawrence Berkeley National Laboratory and the University of Illinois at Urbana-Champaign, to lead the largest academic-industrial research alliance in U.S. history. If the deal is approved, BP will give $500 million over 10 years to fund a new multidisciplinary Energy Biosciences Institute devoted principally to biofuels research.

Gov. Arnold Schwarzenegger, UC administrators and BP executives immediately proclaimed the alliance — which is not yet a done deal — a victory for higher education and for the environment. But here's another way to see it. For a mere $50 million a year, an oil company worth $250 billion would buy a chunk of America's premier public research institutions, all but turning them into its own profit-making subsidiary.

Robert Reich, former secretary of labor and now a professor of public policy at Berkeley, has warned that — because of its size and commercial scope — the BP alliance could be either "a huge feather in Berkeley's cap or a huge noose around Berkeley's neck." The question is, do rules and practices set up to safeguard academic integrity and independence stand up to a corporate deal of this magnitude?

Ultimately, there is an even more basic question to consider. Would the institutionalization of BP at Berkeley call into question the essential objectivity of the research generated by the collaboration?
See also An unholy alliance? and
and this piece about Stanford's deal with Exxon Mobil.

Things are Often Not what they Appear

Remarks on the Berkeley-British Petroleum proposition prepared by invitation of the chair of the academic senate University of California, Berkeley - and presented on the floor of the Academic Senate (In eight minutes).

Things are often not what they appear

This session, for instance. It will be portrayed as the latest expression of the vibrant democratic system of shared governance for which Berkeley was once known. Far from it, this session is a last-minute hurried afterthought by a leadership caught asleep at the wheel, a session convened only because of the rising outrage and opposition to the presence of British Petroleum on our campus. May nobody claim that eight minutes of my clumsy words represent any kind of reasonable and legitimizing discussion. May nobody leave this room thinking that there is anything like a legitimate process in place to guarantee that this Faustian deal with the British transnational corporation is not what it portends, the last -and I believe final- coup de grace to the very idea of a university that can represent the best interest of the public..... more here
Earlier|Later|Main Page
Posted by Aubrey Blumsohn at 4/09/2007 05:46:00 PM

Are you aware that Tyrone Hayes established a contract with Syngenta that sent the monies to his wife's company instead of through the normal channels of a University of Calfornia contract and then suggested that he would continue his research for a few hundred thousand $$$$.

It appears from a number of sources that the allegations made by the anonymous poster are entirely false.

Tyrone Hayes and others responded to me in a similar vein indicating how those raising issues of probity in commercial research are routinely treated. The comment from Tyrone Hayes on 10 April 2007 is as follows:

==
Thank you for passing this on. I am not sure where this person got their information or what they are implying, but there is very little truth in this statement.

Further, I am not sure what exactly “then suggested he would continue his research for a few hundred thousand” is supposed to mean. In four years of consulting for Novartis/Syngenta, the total sum of money that I received was less than $250,000! The University did NOT take its usual overhead and my wife and I received NO SALARY for this entire time. The small sum that we received, in fact, was not even sufficient to pay for the materials, animal space and four technicians that worked on the project. Other monies were raised to complete the work.

I readily admit that, initially, we started up the company to commercialize an assay system that I developed, that was patented by the University of California. I fully intended, with the help of Novartis/Syngenta and Ecorisk (which they offered), to start a private laboratory to do this kind of work for industry to make money. When confronted with the reality of what I would be asked to do, I decided that selling myself and my science was not within my code ethics. I believe you know the rest of the story.