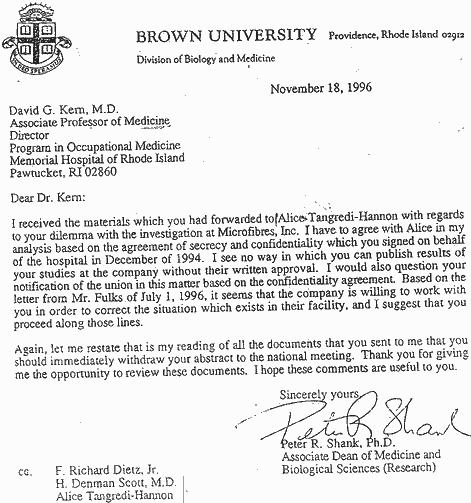 The integrity of medical research is under threat. Many cases have arisen which have demonstrated the inclination of our profession to act in a way that damages both science and the interests of the patients we serve. In many instances, organizations charged with maintaining integrity have colluded, almost routinely, to pervert science, to bully those raising concerns, and to obscure problems. These organizations include our medical Journals, professional regulatory bodies, drug regulators and even formal bodies devoted to maintaining "integrity".

The story of Dr David Kern and the "dilemma" of flock workers' lung is one of many such stories. The letter mentioned Kern's "dilemma". The problem was that Kern had no dilemma. Kern knew that the integrity of a doctor is paramount. The dilemma was one for Brown University.

What happened to David Kern is a stain on the reputation of Brown University. In 1994 Kern reviewed a patient with unusual lung disease. He wondered whether the disease might be due to occupational exposure. Kern visited the patient's place of work - Microfibres Inc. Before visiting he signed a standard confidentiality agreement forbidding the disclosure of any "trade secrets" he might discover during his visit. Over the next two years at least 6 more cases arose, and Kern believed he had sufficient evidence to prove the existence of a new lung disease. He informed the company of his decision to publish his findings, initially in the form of an abstract at the annual meeting of the American Thoracic Society in May 1997.

In response to this, Microfibres Inc., threatened to sue citing the confidentiality agreement prohibiting disclosure of any "trade secrets". However occupational lung disease is not such a "trade secret". The associate Dean of Medicine, Paul Shank attempted to force Kern to withdraw his abstract, and to prevent publication of the findings. Kern refused. He next received correspondence from Francis Diez, president of Memorial Hospital instructing him to withdraw. The hospital, the letter added, was shutting down his entire program "effective immediately". Shamefully, six months after the actions of Shank and Diez, Brown University pretended in a duplicitous statement that they had supported Kern's academic freedom and integrity all along. Less than a week after that, Kern received a letter informing his that his teaching and research positions had been eliminated. Brown University appeared to see nothing to gain from honest research or medicine. Microfibres’ owner and two relatives sat on the hospital’s board, and the company had helped to fund the hospital’s facilities.

University obfuscation in the Kern case was damaging both to our profession and to our patients: In the words of Dr Kern:
Extracts from speech delivered at MIT March 29, 1999

"A small group of Brown University faculty members rallied and called for university administrators to take a principled stand. Instead, the Dean of Medicine hand-picked a Committee of Inquiry comprised of two associate deans whose subsequent report side-stepped nearly every critical issue."

"Moreover, far more important issues such as the suppression of scientific findings critically important to public health and interference with a physician's responsibilities to care for his patients were not addressed at all."

In my case, representatives of the company, the hospital, and Brown University have gone to great lengths to distort the truth. Yet, even were their claims true, their points of contention are irrelevant to the critical issues that remain (a) their attempts to suppress the dissemination of scientific findings critically important to the public health, (b) their interference with my professional responsibilities to care for patients, and (c) their immediate termination of the state's only occupational health program.

And so, we are left confronting arrogance, dishonesty, and a callous disregard for the health of workers. While our medical school and university administrators continue to proclaim their dedication to truth, to the search for knowledge, and to the advancement of civilization, it is all pretense as wordsmithing triumphs over truth and as knowledge is buried. What makes such pretense infuriating goes beyond hypocrisy to the failure of these administrators to realize that people's lives hang in the balance. They either fail to appreciate or are unwilling to acknowledge that their words and actions have jeopardized the health of individual workers, have contributed to the potentially irrevocable loss of an opportunity to advance both scientific understanding and the public health, and have undermined the collective sense of trust and mission in our academic community.

I am grateful that you have posted about the case of Dr Kern, Lisa Blekemore Brown and Nancy Olivieri, and I am also sickened by your own case. I wonder when we are going to learn that Universities are not capable of dealing with these problems themselves and that they need help.

We need to set up an external group to help professionals confronting these problems both here in North America and in Europe. Universities should not be allowed to get away with this.

Are you aware of what happened to Dr Kern 10 years afer this. The long term fate of academics who are abused for being honest should be studied in more detail and exposed.

I had the privilege of sitting beside Dr Kern on a recent cross-county flight. He is a wonderful human being with a remarkable family. I am happy to report that he radiates energy, enthusiasm for life, love of family and a continued inquisitive nature. From my brief moment with him, I was impressed with his integrity, his quick mind, and general good humor. Brown's big loss! Among other things, Dr. Kern keeps bees now. I learned a lot about the diseases of bees, and bee whispers! Hope his life continues to be blessed with the joy of discovery!

I neglected to mention in my last update that doctor Kern continues to enjoy a busy internal medicine practice. I'm sure his his patients are happy he does!