Any complaints? The case of Gideon Koren and the anonymous letters

I have managed to get hold of some interesting letters.

Here is one example: 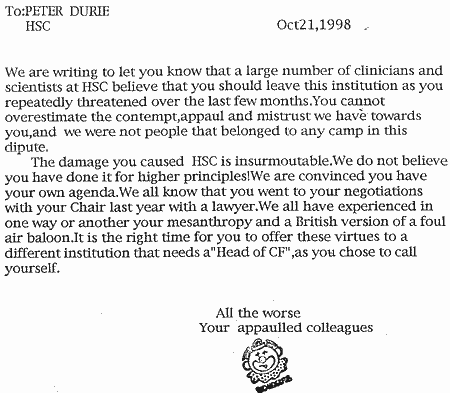 Gideon Koren was at the time (and still is) a very senior academic at the University of Toronto with important responsibilities over clinical research. For months Koren repeatedly lied, denying writing the letters, until he was identified as author by DNA evidence. The University conducted no investigation until forced to do so, calling it an "internal matter" and left Koren's frightened colleagues to accumulate evidence and pay for DNA studies themselves. Koren ultimately received a stiff reprimand and a slap on the wrist.

Although a minor facet of the Olivieri scandal the case of Gideon Koren is yet another sad example of the behavior of Universities when facing problems involving matters of individual reputation and money. In any sane universe, this sort of behavior by a clinical academic in charge of research probity in a major University would be a career ender.

There are at least three profound consequences of this saga for the University of Toronto and for all academics.


The rather marvelous approach of the new Research Integrity Panel in the UK will be discussed in the next post.

In Toronto, from the beginning, the university and Koren attempted to discredit Olivieri and harass the researchers. My experience elsewhere in Toronto taught me how easily a University can become an unwitting accomplice.

The 527 page report on the Koren incident is here. The relevant parts are mostly in section "C", Findings, and "D", Recommendations.

The link above has been changed. The correct links to the Olivieri report are now:

It is rather interesting for me to read the blog. Thank you for it. I like such themes and everything connected to them. I would like to read a bit more soon.

Motherisk Lab which has been founded by Koren, is now under investigation. According to the freedom of information Act this lab brings in millions per year and 90% of his clients are Children's Aid agencies all ocross Canada. I have had experience with his colleauge Joey Gareri. I believe Children's Aid Societies are paying for the results they want from Motherisk Lab. It costs anywhere between $750.00-$1500.00Whereas, Omega Lab in Ohio charges $115.00 (in which my partner took an independant test and passed after failing the tests conducted through Motherisk Lab)

This is just beginning; one gets the feeling..