Our wings fell off

This post is about unwarranted assumptions folk make about pharmaceutical bloggers. It follows an excellent discussion by Pharma Giles, and an obnoxious patient-unfriendly E-mail I received this morning. Some speculate I am a rabid left-winger intent on overthrowing the current order. I have been accused of being "anti pharma" whatever that means. So, to lay my cards on the table:

First: This cartoon summarizes my feelings about the problems we face, and most particularly the problems within academia and medical leadership. 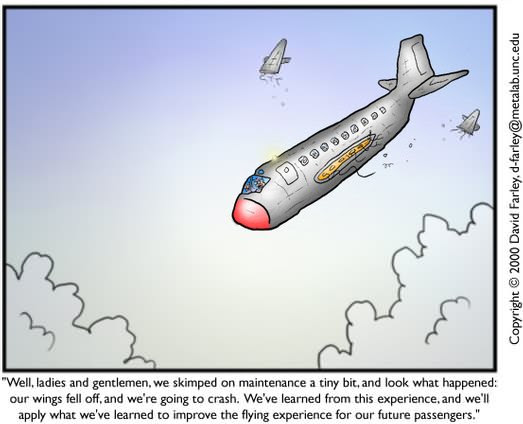 Second: I care about proper honest science. I have a particular view as a result of what happened to me and to many friends. I have also been influenced by many patients who care about honest medical science. I care about the reputation of my profession. I have learned to dislike academic prostitution and astroturf doctors. I also don't much care for that part of our professional leadership who have helped to bring that science and medicine into disrepute.

Third: Some of my good friends are rabid left wingers. I happen to believe in the free market. I want to vomit every time I hear a defence of this industry from a "free market" perspective. Twaddle like this from Billy Tauzin, PhRMA President & CEO. What we have is the very antithesis of a transparent, open and honest free market (see earlier post). A belief in honesty and transparency tends to cut across political boundaries.

Finally: I agree with just about everything Pharma Giles wrote, and will repeat his writings verbatim.

I have an unfavourable bias towards a lot of things. Crime (especially violent crime), war, New Labour corruption, racism, English tabloid newspapers, child abuse, chavs, drunks and junkies (these three are often the same thing), corporate exploitation of the poor, environmental destruction for financial greed, Jehovah’s Witnesses, trial without jury, prescribing antidepressants to children; the list of my “unfavourable biases” is quite long really. Anything that makes innocent people miserable tends to make me unfavourably biased toward it.

Yet I’m also of the opinion that the pharmaceutical industry as a whole has done far more to improve the life of Joe Public than it has to harm it. For every Vioxx or Seroxat, there are at least fifty different drugs that make a huge and positive difference to millions of people’s lives, day in, day out. For over twenty years, I was proud to work for pharma and was equally proud of my own modest contribution to the overall well-being of mankind, which to me should be the industry’s main consideration. It’s the relatively recent phenomenon of “Big Pharma” that bothers me. These vast corporate behemoths have pretty much superseded the multiplicity and diversity of small individual companies, bringing in the “buckets of money” mentality that has largely driven out the “patient need above all else” philosophy of 20 years ago.

Yet despite all that, I still love the pharmaceutical industry, although you might not guess that from the nature of this blog. I just don’t like those in charge of it or their behaviour.

So I don’t think that I have an “unfavourable bias towards the industry” at all. I love it. It’s just that there’s a difference between the way that I love the industry and the way some of its cheerleaders do. I love the pharmaceutical industry in a grown-up way. I want it to do well and I want it to do good. I despair when its leaders run it off the rails and into the mud, in much the same way as a parent despairs when a much-loved son or daughter starts “hanging out with the wrong crowd”. In my own tiny and insignificant way, I try and point out the error of its ways by showing how corrupt and greedy its actions can be or are perceived to be. It’s my hope that a groundswell of similar collective opinion will lead to either a change of heart within pharma’s senior leadership, or to penalties for malfeasance that cannot be sustained by them. Either will do for me.

Pharma cheerleaders and their “Astroturf” blogs (the artificial ones with corporate backing, rather than genuine “grass-roots”) seem to love the industry in a different way. They appear to love it in the same completely uncritical way that a four year old loves their Mommy. Mommy provides security and comfort. Everything Mommy does is therefore wonderful and anyone who criticises Mommy must therefore be bad. Or, as they prefer to say, a disgruntled loser.

I’m a nobody when compared to better-known pharmawatchers such as Dr. Rost and Jack Friday. I can’t really speak for their motivation, but I’m sure none of us criticise the pharmaceutical industry out of hatred for it. We criticise it because we want it to get better. We want it to stop killing people by pushing through improperly tested drugs with dubious safety profiles, or burying adverse trial data, just for quick profits (Vioxx, and now Avandia?). We want it stop practices such as off-label sales, which (for example) led to thousands becoming addicted to Purdue’s OxyContin. We want it to stop buying politicians and start listening to its customers when it comes to drug pricing issues. Maybe, just maybe, the pharmaceutical industry can then start to win back the public admiration it had twenty years ago.

The cheerleaders hide behind current the status quo, saying things like “there’s no such thing as a risk-free medicine” when it is obvious that risks are being wilfully glossed over and regulations ignored with impunity. They dismiss industry critics or whistleblowers as being losers with a personal agenda rather than people with enough knowledge to know that corners are being cut and people's well-being endangered as a result, all solely in pursuit of profits.

The pharmaceutical industry is facing a massive innovation gap and a growing resistance to its current operating practices. It won’t meet those challenges by pretending everything is great, hammering its critics or buying short-term political support.

Email ThisBlogThis!Share to TwitterShare to FacebookShare to Pinterest
Labels: The free market

I think my daughter had a ticket on that flight. Though heavily medicated, I can understand that rah rah syndrome when looking at my bank account. Which equates to far less than the milligrams of Lamictal I take today.
Keep up the good work.
If it wasn't for rational, coherent out of box thinkers we would all be screwed.

I am a medical colleague, and I believe I too was on that plane.
Well written.

I discovered that blowing the whistle is also like landing a plane: It is a controlled crash.

You're welcome. I love the cartoon...

I was trying to explain this to a med-student I met the other day.

I kept trying to lay it out - in broad terms - how pharma was not only crashing but burning through whatever amount of trust and integrity the public still had in the medical profession.

So finally I just asked question I have yet to hear a satisfactory answer to:

"Why were more doctors not publicly outraged by Vioxx?"

Not that the drug is evil . . . not because of anything regrading the ultimate cost/benefit analysis . . . but because of something much more simple and that was made clear in all the documents that came out:

Maybe it is my southern sensibility but I would be outraged. If academic and clinical medicine were to operate with a similar sense of collective professional honor, things could change. But until that time, Pharma has a higher duty of disclosure to investors than doctors . . . whose financial interest are often perversely opposite . . . investors have a larger financial interest in truth than medicine.