Memory Hole (5 November): What else happened? 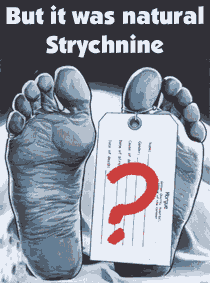 7 years ago today: "Naturalness" as a property of matter

On 5 November 2000 a reminder that "naturalness" is not always perfect goodness.

The pesticide, rotenone, is extracted from the dried roots, seeds and leaves of various tropical plants that produce their own "natural" pesticides. It is widely used on home-grown fruits and vegetable produces Parkinson's disease in rats. Because it is "naturally" occurring it is advertised as being safer than synthetic pesticides. It is also used to kill unwanted fish. It is allowed to be used to grow "organic" produce.

Science has to apply to the natural and unnatural.

On 5 November 2003 Dr. Thomas Whalen, Chairman of FDA's advisory committee that had voted on Nov 3 to approve resumption of silicone breast implants, wrote to FDA Commissioner, Marc McLellan, urging him to ignore the vote of his own committee and not approve. Whalen said "I felt morally compelled" to do so. "Long-term safety, the concern that prompted removal from the market 11 years ago was clearly not demonstrated".

I have a better idea: Why not publish the honest and complete raw data and let science work as it should? Patients (and their doctors) and scientists have a right to draw conclusions or even decide to make dumb decisions based on proper unfiltered data. It's called science.

Email ThisBlogThis!Share to TwitterShare to FacebookShare to Pinterest
Labels: The Memory Hole

Link to Doctors for research integrity is broken.