The problems at Nottingham University

This post is not about science. It is in support of a postgraduate student (Rizwaan Sabir) and an administrator (Hisham Yezza) at Nottingham University, a short drive from my home.

Following my series of posts about MK-ULTRA research 50 years ago, Daniel Goldberg at the Medical Humanities Blog elaborated on the idea of state involvement as a necessary element in the most serious kinds of unethical human research.

This can happen in several ways: a) some of the worst examples of unethical research have been carried out by the state itself, b) precedents set by the state create cynicism over professional ethical guidance which is administered by the state, and c) state functionaries (professional regulators, product regulators) play an important role in the suppression of concerns over unethical conduct and assist in the bullying and marginalization of individuals raising legitimate concerns.

Systems function well, and gravitate towards some sort of integrity and truth when there is variability within those systems. Properly functioning systems require dissent. They require the diverse commentary of many individuals with differing perspectives on ethical standards. They require transparency. They require crooks, cooks and discussion over the definition of crookery and acceptable behaviour.

Clearly, the involvement of the state as a necessary element in systematic University malfunction goes beyond science. The problems of the past week at Nottingham University have been discussed elsewhere in some detail. Briefly, a postgraduate student (Rizwaan Sabir) was conducting research (into terrorism). He was arrested after downloading material (related to terrorism) from a US government website. I believe that the material is here - take a look. His Nottingham University supervisors insisted the materials were directly relevant to his research (which is on terrorism). A university administrator and previous student at Nottingham University (Hisham Yezza) printed some of the (publicly available) material for him. Both men were arrested, their homes were searched by police, and Yezza (the printer) faces immediate deportation. Upper echelons of the university (businessmen) decided that they knew what constitutes "legitimate research material". Certainly there are real and serious dangers in this world of ours. People who feel they have the right to blow other random individuals apart (or to act as apologists for others who do) are a part of that problem. Dealing with those dangers involves proper discussion as to what they are. That is what Universities are for.

Some news reports are here, and here. A campaign site is here. Yezza is Editor of the magazine Ceasefire - (download the latest issue here).
In the words of Thomas Jefferson 200 years ago:

It is error alone which needs the support of government. Truth can stand by itself.
(Thomas Jefferson 1743-1846, U.S. President, Notes on the State of Virginia, 1782)

We understood this 60 years ago. 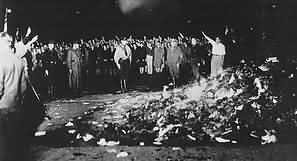 The university and police authorities seem to be facing a public relations disaster, thanks to all the people in Nottingham who stood up and refused to accept the innocent detention of two of their own. As long as this spirit of resistance continues, we have some health left in our society.

"When I was first arrested I tried to explain that this was obviously a huge misunderstanding, not to mention a monumental waste of time. I was treated well by custody officers, especially after they got to know me; the usual reaction was "you don't belong here". Being in custody is a harrowing experience but I managed to get through it by keeping my mind busy with reading and writing.

I love Britain. I have always done my best to combat extremism here. I realize the police have a difficult job to do and I am by no means a conspiracy theorist, but I really feel that my political activism [Hich is a prominent human rights protester] over the past few years has factored as a major reason for the enquiry to take as long as it did. I hope that this isn't an indication of a wider trend that sees political activism as another subversive phenomenon in itself. This would really be a great disservice to the tradition of freedom of speech that the British people have fought so long and hard to achieve."

People have a state-sanctioned right to Freedom of Speech. But woe betide them, should they use it, because while a person may not be punished for speaking out, their lives may be made unbearable by oblique means. It's the cowards who use these covert methods that I want - the people who act in secret, and imagine that they can get away with it. And I'm going to have Ruddick on spit.

"Ideas are more powerful than guns. We would not let our people have guns, why should we let them have ideas." -Joseph Stalin

University of nottingham aka UNIM or UNMC
http://nottingham-university.blogspot.com

University of nottingham aka UNIM or UNMC
http://nottingham-university.blogspot.com