The bystander effect: would you stop for Britney Begonia? 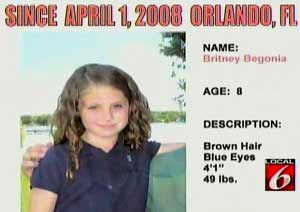 Local 6, a Florida TV station has been conducting a series of experiments on the bystander effect.

In the latest "missing child experiment" they placed numerous posters in a mall with photographs of a missing 8 year old "Britney Begonia". Britney herself sat next to some of the signs. Hundreds of people walked past and saw the posters, but only two stopped to ask Britney anything. Many bystanders questioned later said they noticed the strange resemblance between Britney and the poster but were "fearful of getting involved."

An earlier Local 6 experiment involved a fake burglar breaking into a home. See also this publication on the bystander response to a mock casualty involving arterial bleeding.

The bystander effect has been extensively studied. The more people who observe an event, the less likely it is that anyone will intervene to help. Observers assume that someone else will do something and they feel less responsible. The obviousness of the problem makes little difference.

This is something that will be familiar most people who have tried to raise problems in science and in medicine. It is the underlying message of at least a dozen E-mails I get each week. Local academic colleagues very rarely engage with problems that go right to the heart of what it is to be an academic (or a doctor). They are happy to allow principles to be ignored, patients to be abused and for those raising concerns to be bullied into unemployment or even suicide. The silence and collusion with misconduct and fraud extends to professional regulatory bodies, drug regulators and government. It is hardly surprising concerns are never raised until it is too late.

Here is a selection of quotes about collaborators, bystanders and the shame of all those who fail to speak, and who fail to ask questions.

Science may have found a cure for most evils; but it has found no remedy for the worst of them all - the apathy of human beings.
Helen Keller

Truth is not only violated by falsehood; it may be equally outraged by silence.
Henri Frederic Amiel

To assist Enron all they had to do is to do nothing, and they did nothing very well

He who passively accepts evil is as much involved in it as he who helps to perpetuate it.
Martin Luther King, Jr

Our lives begin to end the day we become silent about things that matter.
Martin Luther King, Jr.

What luck for the rulers that men do not think.
Adolph Hitler

And the multitude was silent, not a voice, not a sound was heard upon the hillsides, across the valleys where they stood.
Richard Bach, Illusions

To sin by silence when they should protest makes cowards of men.
Abraham Lincoln

There is no shame in not knowing; the shame lies in not finding out.
Russian proverb

A society of sheep must in time beget a government of wolves.
Juvenal

The average age of the world's greatest civilizations has been two hundred years. These nations have progressed through this sequence: From bondage to spiritual faith; from spiritual faith to great courage; from courage to liberty; from liberty to abundance; from abundance to selfishness; from selfishness to complacency; from complacency to apathy; from apathy to dependence and back into bondage.
Fraser Tyler

You may never know what results come from your action. But if you do nothing, there will be no results.
Gandhi

Great post, and great quotes, I may have to steal one, and I say that honestly, with integrity!

I hear where you are coming from Aubrey - boy do I hear.

It seems many folk sit back and whinge yet let others take the flak for sticking their necks on the block.

There are many forums where people complain of this and that... maybe one poster on these forums will actually try to make a change for the good by campaigning... the others sit back and continue to whinge.

There have been times throughout this whole Seroxat campaigning where I have thought of throwing the towel in, after all there are others who are out there doing their damndest to get the word out but then I would just become one of the whingers wouldn't I? And I don't like to whinge without doing something about it.

The Scientific Misconduct Blog is a testament to someone who doesn't sit around whinging. You are doing a mighty fine job sir.

A similar real life situation happened in the 1960s in New York, where a woman was beaten to death repeatedly in view of dozens of people who did nothing about it, which includes calling authorities.