Whose mouse is it anyway? 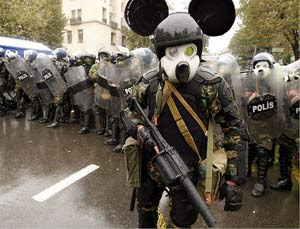 The LA Times has a fascinating article about Disney's copyright claim to Mickey Mouse. The article is relevant to this blog because it is about bullying and legal overkill in an attempt to suppress discussion (including, in one instance, academic discussion).

After the painful experience of losing Oswald the Rabbit, the Disneys "held on to everything they did with a ferociously strong grip".

The discussion about Mickey resulted in a 2003 paper in a University of Virginia legal journal that argued "there are no grounds in copyright law for protecting" the Mickey of those early films. A Disney lawyer "threatened the author with legal action for "slander of title" under California law".

Earlier, Gregory S. Brown, a Disney researcher challenged the arguments of Disney lawyers who wrote that "Mickey Mouse had been created by Walt Disney Co. in 1928". The former archivist knew that the company didn't exist then. Without ruling on the merits of Brown's arguments, the judge tossed it aside as untimely. "He was clobbered with a $500,000 judgment". "His appeal was dismissed when he missed a filing deadline. Disney then seized $20,000 from his accounts" and he was left bankrupt.

They "threatened to sue three Florida day-care centers for painting Disney figures on their walls." They sued a a home-based business for $1 million "after a couple put on children's parties with ersatz Eeyore and Tigger costumes."

In fact "many of Disney's most famous figures were the creations of others, including Cinderella, Pinocchio, Pooh and Snow White, though it has vigorously protected its depictions of them." (A legal dispute with Disney bankrupted the publisher holding the Bambi copyright).

[In my view there is a fundamental difference between Mickey and Avandia (or Zetia, Actonel, Zyprexa, Vioxx, Paxil) as a "product" anyway. A scientific medical product is not simply the molecule (the depiction of the Mouse). A drug product is a scientific package comprising both the molecule and open scientific discussion. Without the honest and transparent science, there is no product at all.]