On the redefinition of research misconduct

Research misconduct (scientific fraud) is the violation of the standard codes of scholarly conduct and ethics in scientific research. It includes all forms of intentional distortion of the research process or reckless disregard of that process that place the scientific record at risk. It also includes the violation of informed consent, and improper use of information derived from the assumption of risk by other humans.

Honest scientists can recognize inappropriate research behaviors when they see them. Consider the following:

This was the portion of a 1983 Pfizer document that reported that one patient had been taken off Zoloft (an antidepressant) during a clinical trial. The portion of the report that had been in the public domain (and presumably also with the FDA) from 1983 to 2004 indicated only that the patient was taken off the drug because of treatment failure and nausea, anorexia and painful urination.

The true clinical trial record indicated that the patient had been withdrawn at day 11 of the trial because of thoughts of killing himself and others : "[The patient] began to verbalize feelings of killing other people and then himself." 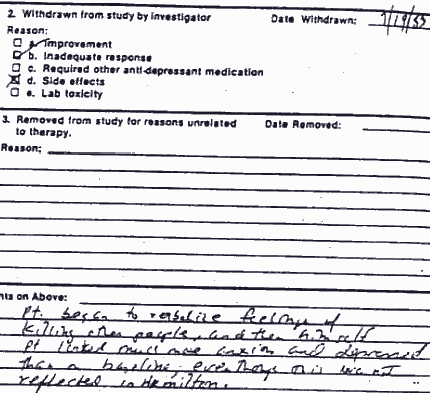 Anyone who cares at all about honest medicine will understand the significance of the subtle redrafting of this and many other records in clinical trials. See original documents here. Read also here for details of the court case that led to release of this particular record.

Why should companies be allowed to maintain the records of clinical trials when human lives and so much money are at stake, and where there have been so many instances of misconduct? The design of a research protocol or system that allows for this form of corporate control is in my view scientific misconduct in and of itself.

And the response from Pfizer at the time: "This is anecdotal patient information," said Bryant Haskins from the company's New York office. A clinical trial is the systematic collection and honest statistical description of anecdote. When each bit of that information is distorted, what we end up with has the mere appearance of science. In medicine, research misconduct leads to death, incorrect decision making, ineffective therapy and misery.

See also Pharmagossip: Those who forget history for a discussion of the retrospective massaging of one individual patient event in Merck Vioxx trials.

Much of what we call "science" in pharmaceutical medicine doesn't pass the most basic sniff test.

Take the survey. Do these instances represent scientific misconduct? If you answer no, please leave a comment justifying your opinion.

As a friend of Chris Pittman I thank you for your effort in helping people see the link between SSRIs and violence. Chris was not Chris that day. Who pays for Pfizer's deceit? Pfizer? No. A 12 year old boy AND his grandparents.

Taken from the Eric Poelhman link:

Seems Eric Poehlman was simply doing on a small scale what companies like Pfizer, Lilly and GSK have done on a massive scale - but in the corporate cases, while falsifying data likewise appears to be to ensure profit by getting a drug approved, they do it no matter what the cost to human life, which doesn't appear to be the case with Eric Poehlman.

How come HE gets prison and Industry gets off scot free?

As for Christopher's case, isn't that more reason for industry NOT getting off scot free?

" Lilly have resorted to treatment non-response and a range of other headings to code what happened."

"...records on Prozac, Seroxat/Paxil and Lustral/Zoloft, you will find cases of homicidality coded as nausea for instance."

"Discontinuation of patients from studies for primary adverse effects such as nausea when in fact there has been a suicidal act;"

"But it is also worth adding specifically that this has been a feature of all trials of Zoloft/Lustral, Seroxat/Paxil and Prozac throughout, as far as I can make out... "

How sad and frightening that the big pharmaceutical companies allow drugs to be put into consumers' hands without revealing to them everything available in order to make an informed decision. It is criminal that the corporate heads enjoy their salaries while so many suffer the results of their fraud. Chris Pittman in his short 18 years outshines those executives in integrity and humanity. I am proud to be numbered among his friends and I pray that someone within the drug companies will eventually step up and help those who are suffering due to their deceit.