Who is the beast? The merger of medical journals and ghostwriters 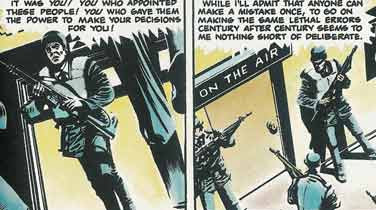 With publication last week of a strange article about the Gillberg affair by the British Medical Journal (BMJ), the dumbing-down is increasingly obvious (read the article and the responses - or at least those which were allowed). The upshot of this BMJ commissioned piece is that researchers faced with questions over the integrity of their data analysis should simply destroy that data. Great advice! News today adds to the concerns. The BMJ have apparently (yet again) declined to publish a paper (about ghostwriting and data misrepresentation of Paxil study 329) involving one of their advertisers (GSK) because "they feel they don't have the resources for the legal work required to check it all". That seems to have become a regular excuse.

I thought I would relate a trivial personal BMJ incident.

On 12 November 2006 I submitted a response to an excellent BMJ article by Adriane Fugh-Berman entitled Doctors must not be lapdogs to drug firms. The point here is not to discuss my response, but the irony of what happened next. Remember that the integrity crisis that brought this blog into existence involved the small matter of "who stands behind the word" in science.

My letter as submitted (and which also appears in the BMJ online weblog ) was as follows.

Of course Adriane Fugh-Berman is correct that we need to bite something tender and to get out of that lap. But we are fighting the wrong beast. The beast is not the pharmaceutical industry - it is ourselves.

Pharmaceutical companies sell products under the banner of science. But their only raison d'être is to make money. Industry has to balance genuine hypothesis testing and transparency against commercial interests and the financial consequences of dishonesty. This is not in itself a criticism - it is a simple fact.

It is also of course true that the industry provides products which are often beneficial to our patients. It is equally evident that many actions of industry have not resulted in benefit, and have instead caused harm. More importantly, we are often completely unable to assess the degree of harm, because information is hidden by gag clauses, the threat of litigation, and cozy commercial arrangements between the regulators and industry (1,2).

We, as doctors, have created the atmosphere which has allowed companies to malfunction. We have allowed industry to subvert the rules of science (3). We have watched quietly as governments and academics have colluded with industry to hide information critical to our patients. We have remained silent as our medical schools have churned out graduates who have no knowledge of the dilemmas and scandals of medicine. We have allowed many of our medical journals to become corrupted and timid. We have remained silent as the General Medical Council and other bodies charged with maintaining integrity have taken action against doctors for raising questions of integrity, while ignoring serious concerns brought to their attention (4). We have failed to support our colleagues who have raised concerns.

The soft parts that need biting may well be our own.

3) Blumsohn A. (2006)Authorship, ghost-science, access to data and control of the pharmaceutical scientific literature: who stands behind the word? American Association for the Advancement of Science, Professional Ethics Report Vol XIX (3) http://www.aaas.org/spp/sfrl/per/per46.pdf

Competing interests: Involved in a dispute with Procter and Gamble Pharmaceuticals over hiding of research data and research Integrity. http://www.slate.com/id/2133061/

The letter as published in the print version of the BMJ (BMJ VOLUME 333 25 NOVEMBER 2006 page 1121) is below. It is apparently signed by me as if written by me. However I did not write it. Two critical sentences had been removed, and it is therefore not the letter I wrote. Although this is apparently trivial, I found it irritating and inappropriate. This was particularly so, in view of the BMJ's (successful) efforts at the time to remove an article by Peter Wilmshurst related to those two sentences (again based on a legal threat). It is not up to a journal to decide whether my edited writing still says what they think I want it to say. Perhaps medical journals don't understand the fundamentals. I wonder how often this happens? Does it matter? 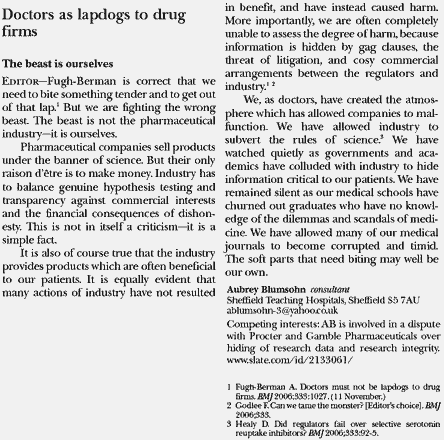 Appendices
Get your act together BMJ. You might start by having a debate about your principles and the difference between a medical journal and the Sun newspaper. You might also allow some proper discussion (by proper discussants and involved individuals) about the principles underying the events you are so studiously ignoring.

Great post. One thing remains unanswered for me -- information about the study 329 article. You mentioned briefly that it was rejected for a very lame reason -- has anything else been written about the BMJ's handling of said paper?