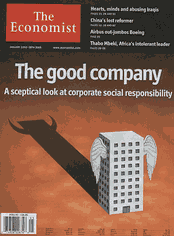 The publication is timely. We know that several scientific journals have recently rejected manuscripts following legal threats. We also know that several manuscripts have been rejected on the grounds that "we feel we don't have the resources for the legal work required to check it all". Rejected manuscripts commonly contain information perceived to be against the interests of a corporate sponsor, an advertiser, or powerful colleagues within the scientific discipline.

It would seem important that journals should disclose these instances. When journals appear to be rejecting (or not reviewing) manuscripts based on factors other than science, it should cause us to place a red flag against the work they do publish. Although journals sometimes claim legitimate fear of litigation, such fear cannot extend to mere publication of the fact of intimidation. It would seem a simple matter for a journal to publish that they had been intimidated through legal threat to prevent consideration of a manuscript. The failure of journals and editors to publicize and condemn such threats would seem to me to suggest complicity.

There is also the small paradox that while journals express concerns about "libel" this is not generally matched by any great desire to correct inaccuracies in the science they publish (take JAACAP for example) - even inaccuracies which are likely to have resulted in patient deaths.

In their article Bailar and colleagues document a case of attempted suppression involving Elsevier and IBM. I have summarized/extracted the incident below:

The story started in 1985 when a chemist in a particular IBM research facility in California wrote to IBM Corporate Headquarters about a cluster of cancers amongst employees. In response, IBM commissioned a study of brain cancer mortality among electronics workers, to be conducted by researchers at the University of Alabama. The investigators reported that:

"...mortality from brain cancer among male electronics workers increased as the duration of employment in “technical jobs” lengthened. This was consistent with a trend previously reported, that the risk of dying from brain cancer is highest among electrical and electronics workers with long-term work histories—specifically, those of ten years or more—and with probable exposures to solders and organic solvents." Eleven years later (in 1996) this IBM sponsored study relating to brain tumors was published (Epidemiology. 1996;2:125-30).

In 2003 IBM was forced to provide the raw data underlying the study to plaintiffs in litigation who had other (non brain) cancers. IBM attempted to block plaintiffs’ attorneys access to the file, maintaining that it contained no helpful data. The employee data was eventually passed to epidemiologist Richard Clapp of Boston University. The researchers found excess incidence of other tumors, and patterns of mortality in the IBM workforce consistent with occupational exposures to solvents and other carcinogenic materials used in IBM manufacturing processes. Proportionate mortality ratios were found to be significantly elevated compared to a matched U.S. population. The types of cancers that were increased were consistent with the findings of other studies of semiconductor workers.

Judge Robert A. Baines ruled that the analysis of IBM’s Corporate Mortality File data contained in Dr. Clapp’s public Court declarations was inadmissible as evidence in the trial stating that:

“This same study, again, assuming that it is a valid study, could be used to show any number of things, such as if . . . everyone in manufacturing drank coffee in the company cafeteria . . . coffee served in the company lunch-room causes cancer.”

So much for the understanding of Judges and the legal system. The legal "misunderstanding" of basic epidemiology in this case was discussed in the Journal Science (Science law and the IBM case. Science. 2004;305:309) and elsewhere.

The analysis also revealed that IBM had failed to disclose evidence of risks to IBM workers, while at the same time maintaining a Corporate Mortality File that included relevant data and was the best available dataset from which to determine whether the claims by the plaintiffs against IBM were correct. Given that the premise of the plaintiffs’ claim was corporate fraud and concealment, exclusion of these data from the jury’s deliberations was of critical importance.

After losing the case (while being unable to discuss the best available data) a plaintiffs’ attorney said that the prohibition of using Clapp’s analysis of IBM’s Corporate Mortality File data in the trial had meant that, “I fought the case with one hand tied behind my back.”

Clapp then submitted his analysis to the journal Clinics in Occupational and Environmental Medicine. IBM lawyers sent a letter cautioning Clapp not to publish the details of his analysis, stating that it was protected by a court order. IBM then stated that the data were “incomplete and inadequate for reliable study.” Clapp disputed this by saying that the data he received from IBM were close to 100% complete, and that in any event IBM’s own research contractors had previously published an article based on mortality in the same dataset. IBM lawyers then labeled the analysis “junk science.”

In a tour de force of epidemiological misunderstanding IBM then stated that: “In a workforce as large as IBM’s, many workers will, by simple chance, contract unusual diseases.” “There’s no evidence that any workers’ illnesses were caused by their work at IBM.”

In March 2004, in a letter to plaintiffs’ attorney Steven Phillips, IBM attorney Michael Templeton wrote that publication of the study would represent “a misappropriation of data that Dr. Clapp has no right to use for such purposes,” and that “IBM expressly reserves all of its rights to take any appropriate action.”

In November 2004, the IBM Medical Director sent a message to employees. The message began, “Safeguarding employee health, safety and well-being in the workplace is core to our values and woven into every aspect of who we are as a company. This includes rigorously evaluating our business practices and work environments.” 25 The message went on to state that preliminary evidence from the UAB study revealed that IBM employees had fewer cancers than expected.

This appeared to have been based on an IBM analysis of those data that looked at cancer "incidence" (instead of cancer mortality as had their own previous manuscript and the manuscript of Clapp), apparently failed to take account of exposure or exposure time and excluded some workers. Clearly cancer incidence is a different endpoint (and probably a less reliable one). Several other criticisms were made of this alternative and completely different study (which IBM then proceeded to submit for publication).

Clapp then wrote again to the editor of Clinics in Occupational and Environmental Medicine (and Elsevier Journal) asking to publish the mortality data, and re-submitted the manuscript.

The manuscript was refused.

Elsevier spokesperson Eric Merkel-Sobotta, when asked whether IBM had contacted Elsevier about the study, said, “There’s been no coercion and no threats.”

One commentator stated : "A nod is as good as a wink to a blind horse, and threats are unnecessary when the media are prepared to apply self censorship rather than make waves.”

Other instances involving other Elsevier Journals are discussed: "the journal “serves as a convenient venue for the publication of industry research.”

In March 2006, after more than two years of intimidation and delaying tactics by IBM, plaintiffs in New York got that state’s court to declare the Clapp and Johnson study non-confidential. That motion removed any residual basis for objection to publication of Clapp and Johnson’s detailed study. The court in New York issued an injunction prohibiting IBM from interfering with Dr. Clapp’s efforts to publish his corporate mortality study. Accordingly, Dr. Clapp submitted his paper and it was accepted and subsequently published in the journal Environmental Health. (Clapp et al., Environ Health. 2006;5:30 (PDF here).

"The actions of IBM and of Elsevier Science point up the need for speedy government action to obtain non– industry-funded studies of many workplace hazards and a wider commitment of all journals, editors, and their publishers to ensure that important research findings that may affect public health or social justice reach both the scientific community and the public as rapidly as possible."

Personal opinion: If IBM has a casual relationship to the truth involving it's own workers, can I trust information it provides me as a consumer? If IBM is confident in it's scientific statements it needs to be able to defend these based on science and the data it provided. Threats and meaningless accusations of "junk science" are never appropriate. Is our medical medical leadership saying anything at all? Are we teaching our medical students about this? This episode is a disgrace.

SLAPP = “strategic litigation against public participation”—suits, which aim not at winning in court, but at intimidating into silence a group or a publication raising issues of public concern.

In the US this practice is being increasingly challenged.