The debate about the functioning of the pharmaceutical industry is enmeshed in a wider political debate. There seems to be reluctance to confront the ideological issues head on. This allows the continued burbling of those who create ideological opponents by declaring themselves on the side of "the free market" and against "intrusive regulation" while failing to define the meaning of the words they use. It is why we read twaddle like this from Billy Tauzin of PhRMA or the illogical rants of Robert Goldberg and Peter Pitts on DrugWonks. These individuals (in my view) represent the very antithesis of the free market they espouse.

There is an interesting "Political Compass" that has been working its way through a few political blogs. Take the test here. My score is below. I challenge my friends on the blogroll to report their scores. I suspect we all lie in a similar range - hardly foes of the free market or of industry in general. 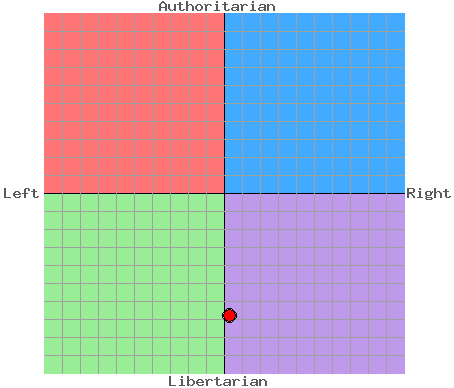 As already pointed out, there are some significant flaws in the questionnaire, but it's a useful start. Some propositions are worded in such a way that people with radically different views on the issue would be forced to answer in a similar way.

Here is one example of a proposition one is asked to score:

Question A: "Governments should penalise businesses that mislead the public"

That is an incomplete proposition, and one which begs several qualifying clauses. One could ask a different question:

Question B: "Governments have the right to protect businesses that mislead the public by enacting legislation and through regulatory procedures which
a) disallow scrutiny
b) allow hiding of evidence
c) prohibit litigation by individual consumers through regulatory pre-emption rules"

I suspect these answers would distinguish Billy Tauzin or Robert Goldberg from the ideological straw-men they set up as adversaries. The distinction is between honesty and dishonesty, and open transparent science versus secrecy.

Email ThisBlogThis!Share to TwitterShare to FacebookShare to Pinterest
Labels: The free market, The political compass

Economic Left/Right: 7.25
Social Libertarian/Authoritarian: -4.15. Adjacent to Milton Friedman, and proud of it.

Billy Tauzin and friends have no interest in a free market. As all lobbyists for any group (not just industry group, but any group) they want to put a thumb, or a brick, on the scale in favor of their interests.

sorry aubrey but i lost the pic/plot thingy. looks like i line up as a sorta libertarian with slightly lefty tendencies.

i'm dead center in the green box, where on the sample "test" is; Dalai Lama. forgot to write down the stats.

WE NEED A SCIENTIFIC INTEGRITY TEST.

then some sort of integrity test should be done ON EACH AND EVERY CORRUPT EVIL B*****D involved and then they should be STRUCK OF whatever register they are on and tried in a HARSH court of law for ruining the lives of the whistleblower (and the people the 'whistleblower' had the COURAGE to try to protect).

You can see my results here.