I'll also comment on any appearance of any discussion in the BMJ about questionable Ezetimibe research.

Rules: As usual this is for the BMJ as delivered to subscribers in the UK. The classified advertisement section is excluded, as are pages advertising the BMA or products of the BMJ/BMA/BNF. 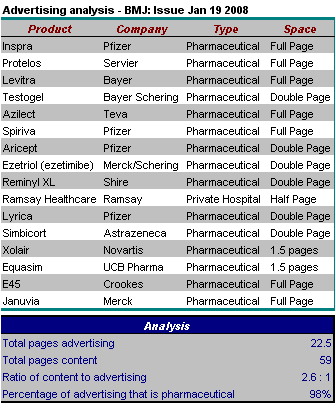 There were two rather good articles about osteoporosis in this issue. I'll discuss these over the next few weeks.

Postscript: Matthew Holford posted an interesting commentary on this BMJ Ad-watch. He revealed correspondence with the BMJ asking about their reported rejection of a scientific paper criticising GlaxoSmithKline. This rejection was apparently on the basis of the legal costs of review rather than on factual content. He asked how much an advertisement costs in comparison with legal "peer review" of a manuscript (perish the thought). He received no reply. I'll say more about this next week.

I mailed the BMJ about advertising, and whatnot, a little while back. It didn't respond.