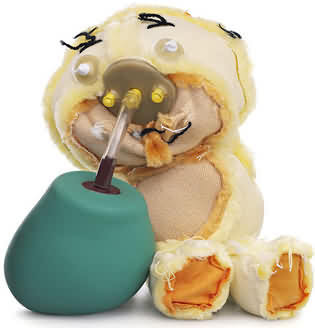 I thought I would repeat the story of the thug and the policeman from the end of my previous post.

That’s what artist Kent Rogowski’s has done in his Bear series. He mangles our memories of the world.

Perhaps a metaphor for the effect of the pharmaceutical industry on the conduct of science (in collusion with our medical leadership and "regulators" of course). Usual understanding turned inside out.

A CHIEF OF POLICE who had seen an Officer beating a Thug was very indignant, and said he must not do so any more on pain of dismissal.

"Don't be too hard on me," said the Officer, smiling; "I was beating him with a stuffed club."

"Nevertheless," persisted the Chief of Police, "it was a liberty that must have been very disagreeable, though it may not have hurt. Please do not repeat it."

"But," said the Officer, still smiling, "it was a stuffed Thug."

In attempting to express his gratification the Chief of Police thrust out his right hand with such violence that his skin was ruptured at the armpit and a stream of sawdust poured from the wound.

He was a stuffed Chief of Police.

How many Harry Limes do you reckon work for the Worshipful Company? And are they really worth £20,000 each, tax free?

Sheffield must love this blog.