The fall of the General Medical Council - Part I: Confidence or con 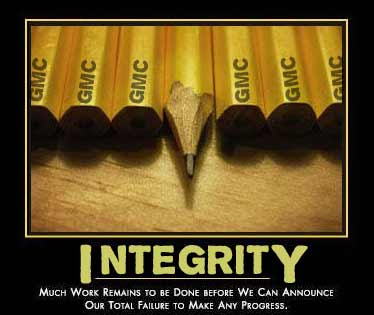 Last week I received a tentative invitation (via the group Justice in Health) to "attend" an "event" at Westminster on 24 July 2008. The event "The Future of Health Professional Regulation" is hosted by the Council for Healthcare Regulatory Excellence (CHRE) and the Department of Health. It is supposedly about sorting out professional medical regulators in the interests of patients.

I will not be attending.

Sham public consultation has become a dismal hallmark of this Labour government. They have not learned to listen.

One of those regulators is the General Medical Council (GMC). The GMC is the body that registers and is supposed to "regulate" the integrity and "fitness to practice" of UK medical doctors. This is an important job. The GMC have a huge credibility problem.

If the DoH and the General Medical Council really wanted to find out how to reform themselves in the "patient interest" then they would invite their fiercest and most thoughtful critics to explain the problems that have arisen. There are many such critics. Those critics would detail lamentable and inappropriate behaviour. They would explain how "regulators" have acted to hide fraud, misconduct, and other activities which have damaged patients and science. They would explain how the GMC has bullied some individual doctors, while ignoring parallel but far more serious integrity failings involving the "old boy's network".

There are many people they could invite to present aspects of the regulatory problem in detail. I am relatively sensible. Others provide a range of insights - Peter Wilmshurst, Rita Pal, Charles Medawar, John Abraham to name a few. Many patients tell compelling stories of obvious regulatory obstruction.

But inviting thoughtful hard-hitting criticism is not the intent.

Instead we have a profusion of "reports" which have no meaningful intersection with the real world.

Here is one from a week back:

I talk regularly to doctors and patients about the systems that regulate integrity in the UK. I discuss the malfunction of professional and pharmaceutical regulators, sham investigations, and the bizarrely inconsistent approach of the General Medical Council to the telling of lies by doctors. My thoughts are marginally less boring, irrelevant and nausea-inducing than "Implementing the White Paper". Here is the feedback form from my recent teaching session with postgraduate general medicine trainees in Sheffield. No nausea is reported.

So, Department of Health (and the General Medical Council), why not invite your critics to explain how you need to restore decency and relevance to regulation? Invite them to explain in detail - not under conditions of a carefully controlled "consultation". The ghosts of the Bristol babies, the many patients who have died as a result of corrupted pharmaceutical research and the victims of Harold Shipman might applaud. I doubt they would applaud throwing time and public money at an irrelevant confidence scam.

Email ThisBlogThis!Share to TwitterShare to FacebookShare to Pinterest
Labels: sham consultation, The GMC

I imagine that that lecture (series of lectures?), would have been interesting to attend. At least they can't say that they weren't warned!

Hello Aubrey Blumsohn, I just found your blog via a reference by the University & College Union (UCU) about academic freedom. I went as a member of public to a meeting of the CHRE (CRHP) in February and noticed immediately the problem they face. As you say, they have the task of creating the appearance of regulation. I was very surprised how overt this was, and was struck by the effort they had to make to keep face - it occupied a lot of their time and made them a little agitated. You might be interested in my report of the meeting, here is the link to its web posting: http://ipnosis.postle.net/pages/CHREJanetLow.htm