How bad science transmutes into an anti-vaccine meme

The pharmaceutical industry is hardly my friend. A whole lot of badly corrupted science results from collusion between large parts of this industry, prostituted academics and "regulators".

However, I frequently marvel at the way in which some supposed campaigners against industry corruption seem to have incorporated the worst excesses of the very same corruption into their approach -- bullying, anonymity, rejection of science, and discussion based on a prior view rather than on evidence and logic.

There are many honorable and effective campaigners for integrity. However, there are a good many "campaigners" who muddle the possibility of scientific debate so successfully, that (to paraphrase David Healy on scientology) - if some of these "campaigners" did not exist, industry would have to invent them.

Let us take a look at a recent Mayo Clinic study reported in preliminary form this week at the International Conference of the American Thoracic Society in San Diego.

This was an oddly designed retrospective study, ostensibly aimed at investigating the effect of Flu Vaccination on Flu-Related Hospitalizations in Asthmatics. The meeting abstract by Joshi et al., was entitled:

The study examined a cohort of "all pediatric subjects who were evaluated at Mayo Clinic, Rochester, MN, USA who had laboratory confirmed influenza during each flu season from 1999-2006". The authors conducted a case control study looking at those individuals who had been hospitalized with flu (cases) and those who had flu without hospitalization (controls). They further determined who had received vaccination, and who had not. They found (unsurprisingly for a study of this design) that having received prior vaccination was associated with a three times greater chance of hospitalization.

In other words, individuals with Flu were divided into four groups: 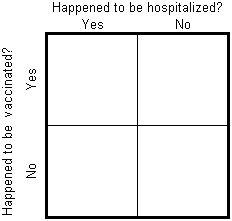 Now, there is some legitimate concern that Flu vaccination might cause exacerbation of asthma under some circumstances (The Lancet, 1998, 351: 326-31). Whatever the merits of Flu vaccination, anyone with the vaguest understanding of science and logic will understand that the Mayo study has nothing much to do with answering the question of "should asthmatics be give the flu vaccine". It may be the case that the vaccine is entirely useless, or even harmful, but this study is not particularly informative.

Concluding that vaccination causes the increased hospitalisation rate in this study would be like doing a study looking at chest X-rays (CXR) and death from lung cancer. No doubt one would find that those who had a CXR die at least 1000 times more often from lung cancer. Ergo, CXR is a massive cause of lung cancer.

If you really wanted to answer the question you would allocate a very similar group of individuals to receive the vaccine (or not to receive it), and you would end up dividing near-identical groups of patients as follows. 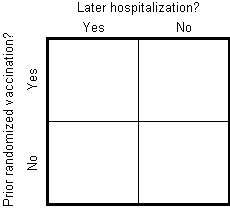 Despite wanting their photographs in the press, these Mayo authors state that their study is worth as much as the CXR example. The lead author stated: "This may not be a reflection of the vaccine but that these patients are the sickest, and their doctors insist they get a vaccination" (paraphrase - "this study is completely uninformative and misleading nonsense").

Despite this (and the fact that any scientific novice should have had no problem understanding the concept of causation), false scientific statements promptly propagated through the internet:

Actually No, that is not what the study shows.

That may be correct, but it is not what this particular study found.

They start by saying:

"Children who have the standard flu jab are three times more likely to end up in hospital".

That is stricly speaking correct, but has nothing to do the effect of vaccine adminstration (or non administration) on the chance of patient X ending up in hospital. If WDDTY don't understand that, they should not be writing about science.

However they then go on to say:

"The vaccine is also useless at preventing the disease, new research has discovered."

Children Who Get Flu Vaccine Have Three Times Risk Of Hospitalization For Flu, Study Suggests

They then go on to say:

The inactivated flu vaccine does not appear to be effective in preventing influenza-related hospitalizations in children, especially the ones with asthma.

The Alliance for Human Research Protection suggests that:

So, will these disturbing findings--namely, ineffectiveness of the TIV vaccine coupled with evidence of harm--lead the the Center for Disease Control and the American Academy of Pediatrics (AAP) to rescind their recommendation for annual influenza vaccination for all children aged six months to 18 years?.....When evidence suggests that current vaccine recommendations are harming children it is unethical to delay issuing a cautionary advisory by invoking "more studies are needed" to delay action. Public health policy should be guided by the precautionary principle--"Above all, do no harm"--not by business interests.

Now, I personally think that the advice of the CDC’s Advisory Committee on Immunization Practices (ACIP) and AAP to recommend annual influenza vaccination for all children aged six months to 18 years is not particularly logical or evidence based. In fact I think the advice is flat out bizarre. A lot of guidance is not based on logic. However, quite how misrepresenting science can be helpful to address misrepresented science is beyond my comprehension.

Flu vaccination can triple the risk of children being admitted to hospital with flu, US research suggests.

The study does has nothing to do with that.

Even Heathfinder.gov propagated a title

"Hospitalization Rates Higher in Kids Who Get Flu Shots"

but they at least had the sense to include a subtitle:

Link likely due to other health problems in children most recommended for vaccination, experts say.

To summarise, if you want to discuss science (or to challenge bad science) it helps if you understand what you are talking about.

See also Psychescientia for a logical discussion of the Mayo study (he also addresses how an oddly titled press release by media staff at the American Thoracic Society contributed to the problem).

Concluding that vaccination causes the increased hospitalisation rate in this study would be like doing a study looking at chest X-rays (CXR) and death from lung cancer. No doubt one would find that those who had a CXR die at least 1000 times more often from lung cancer. Ergo, CXR is a massive cause of lung cancer.So then, when an asthmatic is hospitalized, the doctors go "While you're here, we might as well give you a flu vaccine"? Or is it that people with asthma bad enough that it might require hospitalization have adverse reactions to the flu, so they're vaccinated against it at a higher rate?

Yes that's right. Either of these (and more) are likely confounders. that is why the study is mostly uninterpretable (and does not show what the meme says it does)

Makes sense to me -- asthmatics like myself are routinely encouraged to get their annual flu shot (and in some cases, their insurers will even provide incentives), because they are more likely to get very seriously ill if they get the flu. Since the flu vaccine does not protect against all strains, and, like any vaccine, cannot be 100% effective even against the target strains, it is reasonable to conclude that a significant number of vaccinated people are going to get the flu, and of those, the sickest may actually have a higher rate of vaccine compliance.

If you look at those people that are admiitted to the hospital it is not because of the influenza but the post viral pnuemonia. Asthmatics are very susceptible to this after any kind of viral illness.