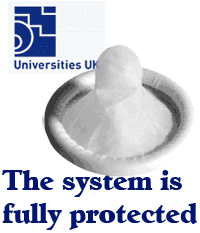 The Times Higher Education Supplement reports on the ongoing attempt in the UK to prevent proper, open, independent and transparent investigation of research misconduct. It turns out that Research Councils UK (RCUK) attempted to induce Universities UK to allow the formation of a "national body for research integrity with powers to investigate allegations of misconduct". They "consulted" with the Universities who refused to go along with this citing "concerns that such a body would be trespassing upon employer responsibilities".

So following this "consultation" RCUK simply shied away from the idea. The body will now be "advisory".

My own very thoughtful response was cited in the article:

Aubrey Blumsohn, a campaigner for greater openness in research conduct, dismissed the plans. "Experience from a multitude of cases has rudely shattered the idea that it will ever be possible for institutions to investigate themselves ... It is a bit like using a condom with hundreds of holes and calling it safe sex."

So what is this all about? It seems obvious that "investigations" of scientific misconduct should themselves align with the usual principles of scientific discourse (open discussion, honesty, transparency of method, public disclosure of evidence, open public analysis, and public discussion of reasoning underlying any conclusion). This is not what UK Universities are trying to achieve. When you see universities reluctant to investigate things properly, it provides reasonable evidence that they really don't want to investigate things properly.

And this is precisely why Universities UK (or it's Monty Pythonesque "Panel for Research Integrity") have not commented on the role of UK Universities in scientific misconduct or its coverup here, here, or here (three random examples).

Here back in my own area of voyeuristic interest (skeletal medicine and calcium physiology) we have a very slowly expanding issue which raises questions as to how we should define scientific fraud.

This paper just out in electronic version in the Journal of Bone and Mineral Research adds to the chatter of concerns about bisphosphonates.

Bilateral Fractures of the Femur Diaphysis in a Patient with Rheumatoid Arthritis on Long-term Treatment with Alendronate : Clues to the Mechanism of Increased Bone Fragility. J Bone Miner Res. 2009 May 6. Somford MP, et al.

Unusual fractures of the femur diaphysis have been reported in patients treated with alendronate and although no causal relationship has been established, excessive suppression of bone turnover and length of treatment with alendronate have been implicated in their pathogenesis. We report here clinical, biochemical and radiological findings of a patient with rheumatoid arthritis and multiple risk factors for fractures who was treated with alendronate for 8 years and developed spontaneous bilateral subtrochanteric/diaphyseal fractures. Bone biopsies obtained form the iliac crest and the femur revealed decreased bone formation with histomorphometric evidence of markedly increased bone resorption at the femur. These results show for the first time that an imbalance between bone resorption and bone formation at the affected bone is associated with the occurrence of these atypical femur fractures. The cause of this imbalance is currently unknown and further studies of the epidemiology and pathogenesis of diaphyseal femur fractures are warranted.

In my view, these are very useful drugs. However, I suspect we are going to see a lot more of this and other problems with time. Perhaps there will be the usual faux regret that we didn't get the thresholds at which undoubted benefit exceeds risk quite right.

Is this fraud? There is a type of "groupthink" and incremental data manipulation by bribed clinicians that has led a whole field of science astray.

Why is the government silent in this type of cases.They should understand that its a very sensitive issue and act accordingly.

The Research Integrity Panel is dominated by a lawyer. As I can make out, he knows nothing about either science or research fraud.

"It seems obvious that "investigations" of scientific misconduct should themselves align with the usual principles of scientific discourse (open discussion, honesty, transparency of method, public disclosure of evidence, open public analysis, and public discussion of reasoning underlying any conclusion)."

Hooray - well said. The problem in a nutshell.