"We promise to be honest" at the University of Toronto - is it enough? 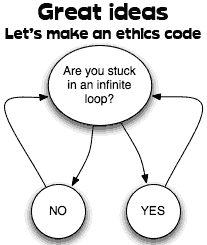 Biomedical researchers at the University of Toronto are starting to sign a new honesty oath - See report in the Globe, also published in the Journal Science last week.

Now why should I have a problem with this?

Those behind this initiative (Karen Davis and Ori Rotstein) presumably have good intentions.

Unlike doctors, scientists don't have an ancient moral code like the Hippocratic oath.

But graduate students beginning their careers in medical research at the University of Toronto now have their own solemn ceremony in which they pledge to conduct themselves in an ethical fashion.

Karen Davis, graduate co-ordinator at the Institute of Medical Science, says the new vow stems, in part, from the growing recognition of the potential for academic misconduct, which includes fraud, plagiarism and the shaping of experiments and research papers in ways that help pharmaceutical companies sell more drugs.

Now let's read the oath itself:

"I promise never to allow financial gain, competitiveness or ambition cloud my judgment in the conduct of ethical research and scholarship," reads the oath, which was recited for the first time last September by graduate students at the Institute of Medical Science. "I will pursue knowledge and create knowledge for the greater good, but never to the detriment of colleagues, supervisors, research subjects or the international community of scholars of which I am now a member."

There are a multitude of problems here. Starting with the minor and ending with the dismally depressing:

a) The Hippocratic oath is clearly working extremely well for the medical profession right now.

b) Given the critical ethical scientific scandals which have occurred at the University of Toronto, the phrase "but never to the detriment of colleagues" is perverse. Ethical behaviour is often to the detriment of unscrupulous colleagues. Are we suggesting that Nancy Olivieri should have hidden scientific findings and accepted sham investigations (at UoT) to avoid causing detriment to colleagues?

c) The phrase "I will pursue knowledge and create knowledge for the greater good" is woefully off target. The obligation of a scientist is to the scientific method. It is to describe that method honestly, including conflicts of interest, access to data, authorship, protocol and statistics. It is an obligation to share raw data. It is an obligation to avoid lying about data. Any "greater good" may or may not flow from honest method.

d) The clear lesson from recent scandals is that it's not junior scientists who have the most pressing need for an oath. The pressing need is for Universities and medical leaders to take an oath themselves.

One could imagine an oath for the University of Toronto:

"We promise never to allow financial gain or the natural desire to hide unethical behaviour cloud our judgment in the conduct of ethical research and scholarship. We will allow scientists to pursue knowledge and create knowledge for the greater good. We will continue to do so even if it is to the detriment of other more important colleagues or large corporations. We promise never to bully or to fire scientists who behave with integrity. We promise never to conduct sham investigations or to tell lies for purposes of bullying, hiding the truth or protecting our friends."

That is not to say that Karen Davis and Ori Rotstein are not well intentioned. However, given the problems at Toronto one has to ask where they were when they should have spoken? When they cite examples, why do they not cite incidents rather closer to home? 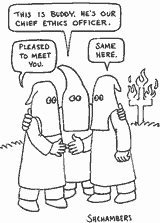 f) Perhaps all of these codes serve as pretext for virtuous mumbling by groups whose very success is based on ethical failure. Morality they say is sometimes taught by the immoral. It is no surprise that Dr David Goldbloom at the University of Toronto (yes the one who fired Professor David Healy) lectures on ethical physician interaction with the pharmaceutical industry, "harmonized research ethics", advises about conflicts of interest, and wrote the 2003 University of Toronto "Task force report" on Interactions with the pharmaceutical industry. He is paradoxically recipient of the Henry Durost Award for "Excellence in Creative Professional Activity" having destroyed a source of real creative scientific thinking within his own institution.

We have an unrehabilitated institution with a less-than-moral reputation producing smokescreen codes without addressing actual failures.