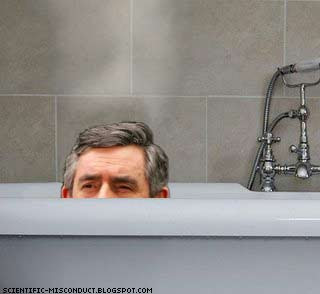 "A good day ain't got no rain. A bad day's when I lie in bed and think of things that might have been."
-Paul Simon, Slip Slidin' Away

This week sees a new furore over the appointment of a GlaxoSmithKline Senior Vice President (Paul Blackburn) to the board of the education watchdog Ofsted. Any last shred of credibility of the UK Labour government is gone. The implications of this despicable appointment are obvious to anyone who has followed the various ins and outs of misrepresented pharmaceutical science and government collusion with GSK. Much of this bad science involved children. It certainly involved deaths and much human suffering.

I am not a leftist or a rightist. I would prefer to see small government, honest government and transparent government. Protecting the vested interests of any favored group or corporation (except to uphold democratically decided law) is not a legitimate role of government. I suppose that makes me a libertarian.

I have no time for those who try to create false ideological opponents by declaring themselves on the side of "the free market" and against "intrusive regulation" while failing to define the meaning of the words they use. This is a debate about corrupted markets and falsified science versus honesty, integrity, and transparency. It is I suppose about the children who died, and whether we care.

Is it "lefty" to suggest that corporations selling products under the banner of science should actually obey the most fundamental rules of science?

Is it "lefty" to propose that drug regulators should actually look at raw data before licensing drugs? Is it "lefty" to suggest that scientists, doctors who prescribe, (and patients who consume) should be allowed to see the honest science underlying prescribing decisions? Is it "lefty" to suggest that regulators are committing criminal acts when they collude with industry to hide the most fundamental facts about drugs under a cloud of corporate secrecy? Is it the role of government in a free market to shield corporate criminals from prosecution and scrutiny?

Unless the debate can rise above the false left/right dichotomy we are doomed. The victims of the current widespread fraud in this industry are not only patients. The victims are the credibility of UK science, medicine, and the honest and most innovative parts of the pharmaceutical industry itself.

The days of the UK Labour Government are numbered. They are likely to go down in history as a cynically corrupt government that has betrayed every aspect of their own supposed mission. I'll leave a detailed discussion of the entanglement between the labour government and pharmaceutical scientific fraud for another day.

So to Gordon Brown -- you are a dismal thoughtless pathetic failure. Sadly, the corruption of politics is such that your successor may not be any better.

Just don't let the door hit you on the way out.

Sophy writes: "Ofsted cares about kids? That is now a big joke. Ofsted appointed GlaxoSmithKlines Senior VP To The Board of Education. Are they out of their minds? What kind of brain fart is that? GSK used babies in foster care and poor kids to test their toxic drugs and now they have their Senior VP on the board of education?"

The mere fact that they [GSK] have a tainted history of either standing in the dock or settling out of court should have had alarm bells ringing at Ofsted. Instead Ofsted act in a way that baffles the consumer.

Agreed, Blackburn, is just an employee of GlaxoSmithKline and probably had nothing to do with GSK testing HIV drugs on babies nor did he probably have any input into the Seroxat/Paxil pediatric suppression that GSK got a wrist slapping for from the MHRA. The whole appointment of a senior vice president of a company is shrouded in mystery. It was stated that Blackburn has a 'passion' for children - So do I. If Blackburn's 'passion' for children is so strong then why is he working for a company who woefully neglected to protect our children when they suppressed information that for all intents and purposes could have saved their lives?

Blackburn can't have it both ways. If he has any morals, he should have left GlaxoSmithKline and told them that his 'passion' for children was his reason for leaving.

Maybe Blackburn has been indoctrinated into the GSK way of life? That being; If the law says we don't have to publish negative trial results, then we won't.

I am sure Blackburn is aware of the whole Seroxat fiasco and how his company kept negative data from the regulators, one would have to be an alien from the planet Zog not to have heard or read about it. A passion for children? Prove it Mr. Blackburn.

There is no such thing as "passion for children" in a pharmaceutical industry. If one has a true compassion for any one of any age they will walk away from this corrupt, and heartless profession.

Time for a new career, and speaking from experience, these new careers do not pay a fucking dime!

These ppl are in a moral quandary if we think they should be: but they are not. Clearly. They have no quandary in what they do for a living.(paycheck).

Stephany, USA parent, mother, advocate and pissed off at the system and the roots that need weeding.

Woah, who is the anonymous poster? They grabbed that from my blog! Hey, no problem really, as long as the word is getting out about this whole sordid affair.