Batman and drug regulation in the UK 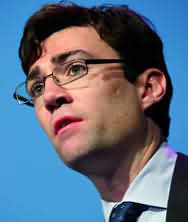 Thank you to the Bitter Pill Blog for pointing out the uncanny resemblance between the Right Honorable Andrew Burnham Minister of State at the Department of Health, and the psychiatrist known as the Scarecrow who works at Arkham Asylum (and has developed fear-inducing toxins) in the recent movie Batman Begins.

I have posted about the Right Honorable Andy Burnham previously:

I posted about the documented threats from the pharmaceutical industry to the Department of Health and Minister Burnham that they would withdraw from the UK if not allowed to get their own way [Link].

I posted about his praise for myself -- while he did nothing about the actual problems of research integrity I raised -- and while the MHRA, his government agency, attempted unsuccessfully to collude with others to obscure them [Link].

I posted about his rather interesting redefinition of the word transparency as it pertains to the UK drug regulator, the MHRA [Link].

Below is the previous letter I wrote to him about a trivial but important aspect of transparency. He has not replied, no doubt because he probably doesn't read about the concerns raised by us the people, or my blog.

Anyway, here is that letter again. I'll send it by mail, and we will see if we can find out why we are not allowed to know anything at all about those who make decisions about our health and about honesty in drug regulation.

Despite the frivolity, there is a serious intent. It is clear that many patients have died as a result of a complete lack of regulatory transparency, gobbledegook regulation, and government failure to implement recommendations of the Health Select Committee report on the malfunction of the MHRA [Link].

To: Mr Andy Burnham
Minister of State, Department of Health
The House of Commons
UK

I wish to let you know about a state secret, and to seek your opinion about it.

I should declare a conflict of interest. I was born in a country where a state secret involved brutal policemen and barking dogs. Secrets which could cause doctors or patients to make incorrect decisions because they have been misled (in even the tiniest way) are not legitimate secrets.

I was therefore delighted to note your letter to Stewart Hosie MP (5/9/06) about the UK drug regulator (MHRA) in which you write: "it is important for the [drug] regulatory system and indeed the regulator to operate in as transparent a way as possible".

Your comments relate to urgent concerns raised by many including The Health Select Committee 18 months ago. MP Hosie seemed upset by the rest of your response, since you suggested no time-scale to implement any sort of plausible or honest review of the MHRA. Given your emphasis on transparency Minister, might we consider the legal and moral implications of a small state secret.

Let me paint a picture: Let us suppose you were a doctor Mr Burnham. You are standing there, syringe in hand, about to inject a potentially toxic drug into a patient. You do so in the knowledge that the MHRA, your government agency, has given a stamp of approval. It would be your fundamental right to know why the MHRA approved that drug before inflicting potential harm on a fellow human being. You might imagine you would have a right to know that the MHRA scrutinised evidence, what named persons were involved, and how precisely those persons were qualified. You might imagine that it should be your moral obligation to know these things.

So let us consider a small secret. Mr Ian Oulsnam is operations manager of the GCP inspectorate of the MHRA. This is a key role in this public body. He makes pronouncements about matters of science and medicine. He makes decisions which impact on life and death. He "investigates" matters upon which patients and doctors depend. He was involved in the MHRA self-"investigation" of the TGN1412 disaster. He makes public statements to the press on behalf of the MHRA. He received parliamentary instruction to conduct the fascinating "investigation" of P&G's conduct in Sheffield. He informed me that he "has a "relevant" university degree and a postgraduate degree in statistics.

I was thus surprised to note on the MHRA website a Freedom of Information request from Mr RC (MHRA FOI 06/185). The MHRA declined to convey a list of Mr Oulsnam's scientific publications [on Pubmed there are none]. The MHRA declined to say what university degrees Oulsnam has (if any). It was stated this is personal information. In the same spirit of transparency, the MHRA refused to sign this FOI response. When asked repeatedly to reply in writing, they posted an unsigned printout of their Emailed response to RC.

Oulsnam then made a scientifically incorrect and bizarre statement to the press about a drug. That statement was reproduced by yourself in correspondence to a MP. I therefore repeated the FOI request. I did not ask whether Oulsnam felt himself qualified to do his job. I simply wished to know what precise university degree(s) Oulsnam has (if any), and at which University. This was again refused on the basis that it is "personal information".

The REQUEST (FOI 06/303): "Mr Oulsnam stated to me that he has a degree, and that he also has postgraduate degree in statistics"..... "it is not clear whether I was misled. I request under the FOI a list of the university degrees and postgraduate university qualifications held by Mr Ian Oulsnam of the MHRA (and the names of awarding institutions)."

The MHRA RESPONSE (FOI 06/303): "The full details of Mr Oulsnam's qualifications are not released as this is considered to be personal information." [the absence of "full details" in MHRA language = "no details"]

Question 1 Mr Burnham: Would YOU inject the drug Mr Burnham?

Question 2 Mr Burnham: Is this behaviour restricted to the MHRA?

A similar FOI request to the Water Inspectorate (DEFRA) requesting degrees of an official yielded a remarkably comprehensive response within 2 days listing all degrees, Universities, subjects taken and dates. I feel strangely confident when I drink water.

Yet the MHRA, which (unlike the Water Authority) uses an intermediary - doctors - to administer potential harm to other humans is as transparent as mud. In another instance the MHRA refused to provide any names of officials who had made decisions about Vioxx on the laughable basis that this might expose them to animal rights activists!

There will always be potential concerns about the training, common sense and conflicts of interest of public officials. But the point is that you, as that syringe-holding doctor are not even allowed to know.

Something is wrong Minister Burnham.

"I feel strangely confident when I drink water." - I did laugh.

The more digging we all do, the more dirt we find.

although my blog sought to offer the comparison of Andrew Burnham with the psychotic psychiatrist known as the Scarecrow, I feel that you extrapolated the dark element here to a whole new degree of sinister.

Consider - if Andrew/Scarecrow is Batman [ aka Bruce Wayne - Industrialist ], that means that the Department is actually controlled by Industry, thereby proving at a stroke that the Dept of Health is unfit for purpose.

You are indeed correct Nostrumdammit. I have corrected the reference. Given the behaviour of some within the system to obstruct science and induce fear in all those trying to tell the truth, this coincidence merits further exploration.

Mr Burnham was a vocal supporter of the ID-card scheme ---- so heavy-handed secrecy is fine by him it's about government malfunction or kickbacks, but when our personal privacy is a stake he seems not to care.

Response:
hcoi-returns-WE1176623644W4621da1c25e88@upmystreet.com
Your email has been sent to the MP for your area;- Andy Burnham , the content of the message is below