The ongoing story of Wyeth, the FDA and Dr. Hampshire 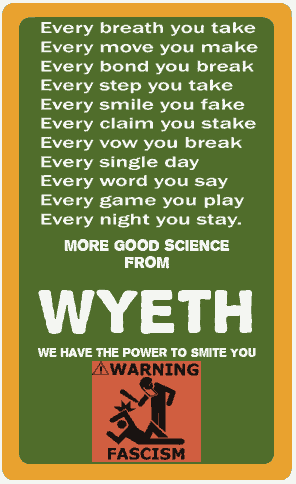 This is an ongoing story that should not be forgotten

From the GAP blog:

Last Wednesday, Senator Charles Grassley sent a letter to the HHS Secretary and FDA Commissioner detailing how Wyeth Pharmaceuticals engaged in a smear campaign aimed at discrediting an FDA safety officer (and GAP client) assigned to review one of Wyeth's animal care products. After Wyeth met with FDA officials and presented false and misleading information, the FDA wrongfully removed GAP client Dr. Victoria Hampshire from her position as the drug's reviewer.

Dr. Hampshire previously found that Wyeth's ProHeart 6, a canine heartworm drug, was responsible for contributing to the deaths of hundreds of dogs. After following correct procedures in mid-2005, the drug was removed from the marketplace due to obvious safety concerns.

Grassley's letter details how Wyeth (by its own actions and those of a subsidiary) and the FDA performed several questionable and unethical actions in retaliating against Dr. Hampshire in attempts to get ProHeart 6 back on the market. These include:This is a disgrace. It is not the way science is supposed to work. It is not the way scientists doing an honest job are supposed to be treated. Shame and more shame on Wyeth, and shame on those who have colluded, covered up, and "declined to prosecute" the criminals in this case.

The Senator earlier sent a letter to Wyeth, demanding to know whether they paid private investigators to spy on the FDA official. A character called Clint Newsum, Wyeth's counsel, was heavily involved in all this. The same Clint Newsum has been paying off pet owners whose dogs have died after taking Proheart. On this website you can see the letters Clint Newsum has sent to bereaved pet owners, offering them "shut up" money on condition they stop speaking out about ProHeart causing their pet's deaths (and absolving Wyeth of any blame).

Some Wyeth products are:See links to earlier reports on this disgraceful story

Wyeth Mission Statement:
At Wyeth, our mission is to bring to the world pharmaceutical and health care products that improve lives and deliver outstanding value to our customers and shareholders.

And for the canine victims and their unsuspecting yet curious owners who never received acknowledgement and confirmation from their vets that ProHeart 6 may have hurt and/or killed their dogs . . . We shall never know the true extent of the possible widespread devastation.

On the topic of dogs and medications:

Keep an eye on Pfizer's "Cerenia" the pill for car sick dogs. It's mostly used for cancer-patient dogs, and now is being marketed for car sickness.

It's my number one hit on my blog searches, where I've linked to side effects [which is vomiting! and more].

Several pharma companies read that on a regular basis.

There's going to be fall out from this drug from innocent people and vets rx'ing a dog this drug for a trip to the market.[just my opinion].

Just like the previous comment states, we shall never know the true extent of the possible widespread devastation.[eventually in this case].

In my opinion, once the pharma companies [such as Prozac for nervous anxious dogs] enter the world of treating pets of already gullible consumers, how can one imagine that those tests are accurate, not withholding data, etc., when we cannot trust these datas to save human lives.