This issue includes an article by Andrew Jack of the Financial Times on the crisis of "Big Pharma" (BMJ 336:418-9 "Balancing Big Pharma's books). The article completely misses the point. If the point is missed there is no chance of solving the crisis. The real long-term problems facing "Big Pharma" (a science based industry) are not difficult to understand. They are:There is no real sense of this in the Jack article. Instead we read:

"It reflects public opinion that is risk averse, sparked by fears such as the reported patient deaths caused by merck's painkiller Vioxx, or GSK's diabetes drug Avandia. Cautious regulators have responded by imposing ever tougher barriers that must be overcome to approve new medicines."

Anyone who wishes this industry well (as I do) must realize that to summarize the problem as a public relations issue is not going to help anyone - least of all the industry itself. The health of this industry (including its long-term financial health) would benefit if a few of its leaders were sent to prison.

There was however a decent article by Ray Moynihan on the subversion of Medical Education by commercial companies. The "Better Together" advertisement for Ezetimibe did not appear this week. Neither did the problematical testosterone advertisement. 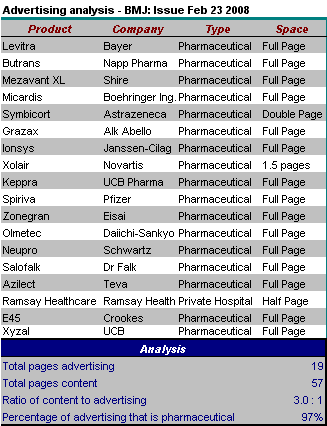 Rules: As usual this is for the UK version of the BMJ. The classified advertisement section is excluded, as are advertisements for the BMA, products of the BMJ/BMA/BNF or the government.

"We protect our reputation by careful balance of editorial and advertising, which means your messages will always stand out".

Here is an accumulated analysis 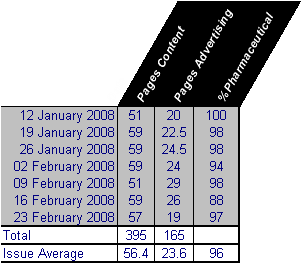 Blogs like yours are the smoke detector that goes off if something is burning...

"The health of this industry (including its long-term financial health) would benefit if a few of its leaders were sent to prison."

It would certainly help restore some faith if that happened. To have hundreds of thousands of people a year harmed by drugs and yet NOT ONE of them count enough to warrant even an apology, let alone action on the legal justice front, is asking for distrust.

"Ask your Doctor if Big Pharm is good for You.

Side effects may include deception, shattered hopes, loss of money, nausea, dizziness and death."

The problems of the industry:

1. Multiple instances of overt scientific fraud
2. Regulatory collusion with that fraud
3. Attempts to cover-up that fraud and to redefine the meaning of science itself
4. Provision of misinformation and malinformation to doctors and patients
5. Government and regulatory collusion to subvert the free market and to prevent consumer litigation
6. Refusal to allow science to be properly scrutinized
7. Increasing evidence that the peer reviewed scientific literature cannot be trusted

To those I add:

8. Internal incompetence preventing the picking of even low-hanging fruit. Midgets cannot reach that high, especially when all the giants have been removed.

That is absolutely right. I have added it to the main list.